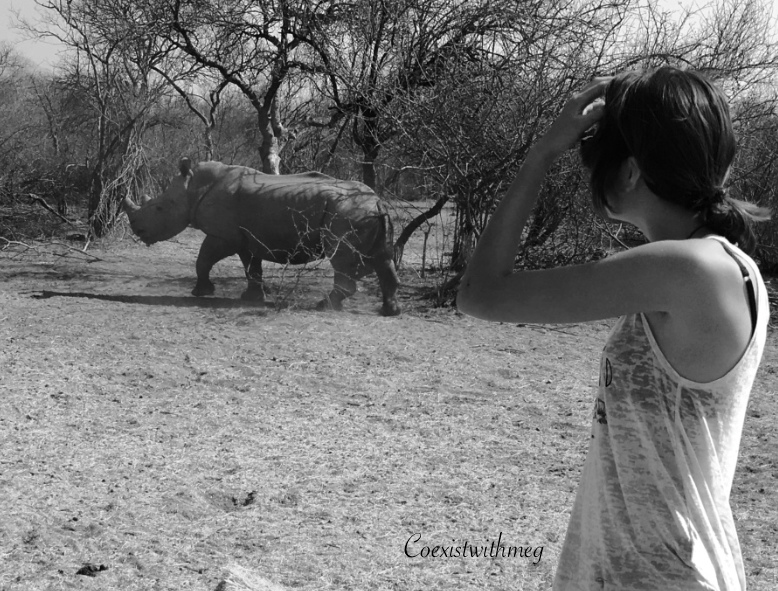 I recently did a talk about my conservation journey and raising rhino orphans. After the talk a lady in the audience asked, “Have you ever been in danger…” I immediately thought ‘yes’ but as she continued her question, my answer changed “… as rhinos are so big and powerful, does working closely with them put you in danger?”

“That’s a great question. Rhinos are very strong and definitely have the ability to cause us harm if they feel it is necessary, for example to defend themselves, but I never felt like I was in danger while working with them. They are generally very gentle and tend to know our limits, especially when you’ve spent time with them and built that bond.

Although I have been nudged and stood on and knocked into the air a few times and ended up with some scrapes and bruises it was never the intention of the rhino to hurt me. To be honest, most of the ‘run-ins’ I had with the rhino orphans have been hunger-related… You know, in the wild they’d nudge their even bigger, even stronger mums when they are hungry but when they nudge us mere humans to tell us they are hungry it’s quite a bit more than a little nudge. That’s the only thing I can think of but it was never really danger.

However, there is another side to your question because when you asked if I had been in danger the first thing that came to my mind was poachers. So, yes, I have been in danger while at the orphanages but not because of the rhinos, because of poachers. The most afraid and at risk I feel I have been has been a result of the potential of poachers coming to attack the orphans for their small horns. There have been times we’ve been told we need to be on high alert because of intel that poachers are targeting us so for me when I think of being in danger it’s the humans that worry me, not the rhinos.”